Well known potter, Jeremy Leach will be at tourist attraction Pennywell Farm, near Ivybridge during October Half Term giving pottery demonstrations and displaying some of his work.

Jeremy comes from a famous family of potters with the Leach Pottery in St Ives having a museum celebrating the life, work, influences and legacy of Bernard Leach, Jeremy’s grandfather.

Jeremy was born in Carbis Bay near St Ives where his father, David Leach, was working at the Leach Pottery. He started potting at a very early age – around five – under his father’s instruction.

After a career spent teaching pottery in London, Jeremy moved to Bovey Tracey in 1970. Now with his pottery in the grounds of the Edgemoor House Hotel, Jeremy is happy to chat about his experiences as a potter which include him setting up the Central School of Arts & Crafts and shortly after, the Craft Pottery in South East London.

Jeremy and his work will at Pennywell Farm on Thursday 26, Friday 27 and Saturday 28 October from 10am to 4pm. There will be demonstrations on an original Leach treadle wheel, designed by his younger brother and fellow potter, Simon Leach. 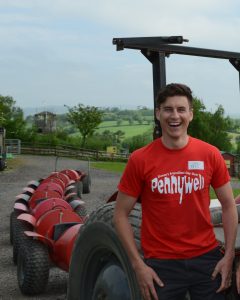 There is also a ‘Leach’ link to Pennywell with Jeremy’s nephew Jesse Leach being Operations Manager at the Farm, although Jesse insists that his skills and talents lie in the day to day running of the farm rather than in pottery.